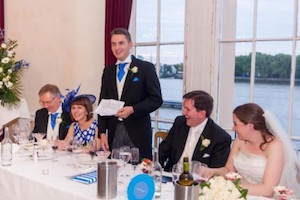 Thanks so much to Seb Potts, our Best Man, for an amazing speech. Here are his notes …

Hi guys, this is the best man’s speech so if you don’t have a drink feel free to go now and grab one. If you do have a drink you are now captive audience.

So firstly I would like to thank you for all being here today at Mike’s and Alex’s wedding. I’d like to say pointing out that Alex looks stunning today, every bit the beautiful bride. I’d like to say the same about Mike, but unfortunately for him I inherited all the good looks. I’d also like to thank all the bridesmaids for their involvement in making this a great day.

When I was first told told that I was to be Mike’s best man, you can imagine my reaction. Well, actually it was a bit awkward as I was keeping my options open for today and as it turns out i’m missing the league 2 play off final just to be here. I’m pretty gutted actually, but it is what it is I suppose. At least there’s free food and alcohol so I can’t complain too much.

So where I did I meet Michael? It’s a funny story really, it was in a hospital in the mid 90s and he told me he was my big brother. I think I replied by screaming at him and crying, but I suppose I was like that back then. From then on he made it one of his goals to try to create a mini-Mike and for the first decade or so he did pretty well. He ‘edumacated’ me on the music such as ‘The Ligthning Seeds’ and Jimmy Eat World, playing Pro Evo and sonic the hedgehog and supporting Man United. My personal favourite when I was 5 was Chumbawumba and I used to fall over when they used to say I get knocked down. He also made me CDs when I was a bit older to try and counter balance my increasing interest in gangster rap music. A lot of it is still really good, though it’s unforgivable that there’s an album with two coldplay songs on it.

One of the main contributing reasons that Mike chose me to do this speech is because I wasn’t at uni with him so I don’t know any embarrassing stories. However, as some of you know Caz was also at Kent and one of my favourites that I’ve heard is about when he went to visit her in France. After a night out at the bar he went back to a taxi, shouting about the impending war involving the fluffy bunny army. He went on to shout at the taxi driver about whether he was on our side or on their side.

For this reason, when we had the stag do in France a couple of months ago, I wasn’t too sure what to expect. On the first night we went to an Irish club and for those who know Mike he can be a bit loud after a few and he started talking to the people next to us who were having a meal. He was also successful in fulfilling a dare to talk a Senegalese guy into giving him his hat and taking a picture with it on. I’d like to take this moment to say thanks to everyone who came on the stag do and made it a really enjoyable couple of days. The overall reaction to the weekend seemed to be ‘I’d have stayed longer if I’d known Toulouse actually looked nice’, which I suppose is a compliment.

I’ve got one more drunk story of Mike’s – I think three will do before I get him in too much trouble. Mike prides himself on his professionalism and I had the chance to meet up with him and a few of his colleagues in London. After going to a few different bars, he found himself a cake that looked nice in a bar and stole it along with a knife. We then walked around the streets for a while, cutting pieces of cake, before eventually ditching it in a taxi. I was informed later that the cake was re-embursed, which should prove that Mike is an upstanding member of society.

So how to describe Mike?

He’s always enjoyed drama and public speaking and many of you might know that he likes a crowd. The fact he gets to talk to an audience today must be an added bonus. He was part of a drama school in Ilford growing up and performed in various shows, while also appearing on American TV a couple of times. We’ve still got it on VHS if anyone’s interested. He also put on a variety show at his school which featured the lead singer of Bloc Party in one of his first ever live appearances. I’ve actually used the ‘my brother knows bloc party’ as a chat up line before and it worked.

His interest in the performing arts extends to karaoke and I’m looking forward to hearing him later, especially if he performs the rap to one week by the Barenaked Ladies. I know he’s also famous to his uni mates for performing Hey Ya by Outkast as he used to perform it every week at the uni bar. He’s also bought many different singstar karaoke games for the playstation, ranging from French R+B to disney and Motown.

Another main interest of his has been computers. From a young age he was taking apart and fixing up computers and he still has a collection today. He was very excited when our parents bought our first windows 98 computer and made many modifications to it. He’s also helped us out with our computer problems and we’ve been very lucky to have him fix our problems over the years.

He also liked Red Dwarf and Buffy and more recently Doctor Who, especially with the episode with Kylie. He obviously appreciates her acting. We also used to watch films together and he introduced me to such classics as Monty Python and Fawlty Towers as well as more recent films.

Mike’s professional career has always been something he has taken great pride in and I know that he has worked hard to achieve many accomplishments over his career. From getting consistently high grades all through secondary school to then becoming a qualified lawyer, I saw he had to overcome many difficulties to get into a very competitive line of work.

When he begun work as a recruiter, it was to his credit that he adapted to a new career and rose up in this profession. The way that he has done this over the last few years has shown incredible mental toughness and adaptability and sets a good example for me to follow.

I also appreciate how he has been supportive of me throughout my studies; from giving me advice when starting secondary school to helping me get an internship at his company and I know he will be a professional role model in my future career.

So now Mike moves onto a new stage of his life and now we have an extra member of our family. From the first time I met Alex I could tell that she was genuinely interested in me and wanted to get to know me, and I have grown to know her as a warm and open person. I speak for the whole Potts family when I say we’ve been happy to have been able to get to know her, as well as the rest of the Harris family. I hope that we will be able to get to know each other even better in the future.

I’m sure you’ve heard enough from the Potts boys, thanks for listening so attentively and for being part of a great day. I hope to see you all on the dance floor later. To Mike and Alex, in the words of the great Captain James T Kirk, Live Long and Prosper.