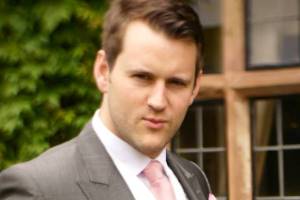 Here are some fun facts about our groomsmen. Some may not be true

Seb has been Mike’s brother for as long as he can remember. A student at Reading University and keen flautist, he initially trained with the Royal Philharmonic but more recently has been providing incidental music for the Big Top Circus at Butlins Bognor Regis. As Best Man, it will be his job to feed Mike the steady supply of strawberry milkshakes it takes to power him, as well as making a speech. Seb has practiced for this by sitting on a park bench and shouting at passers by.

Ciaran met Mike while working at Hays. Unlike Mike however, he got away as soon as he could and now has a respectable job working in a bank or something. Amateur airfix enthusiast by day and shark trainer by night, Ciaran recently combined his two loves – constructing a plastic shark from five boxes of Mary Rose Starter Set A55114. Ciaran probably has some embarrassing stories about Mike, but how do you know if they’re made up?

Depending on your view, Sam is either a people’s hero or criminal mastermind. To the owners of The Casino de Monte Carlo, he is quite simply a menace. Card shark and cad, his love for high stakes Ludo is second only to his love for fast cars and fine wine. As one of Mike’s longest standing friends, he has had to deal with a lot. Please buy him a drink and say thanks!