The Rules of Engagement 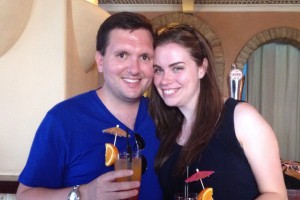 During the month before the proposal, Mike worked hard to ensure he knew what marriage really was and to make sure he was ready for the commitment. Here’s his story …

It was 6 June 2014 – the date of my sister Carolyn’s wedding. Alex and I were taking a stroll through a field behind the reception venue, talking about the type of church we would like to find in Blackheath. Despite being based in Bulford, Alex was spending more time in London and wondered if we could find somewhere more convenient than the central London place we were visiting at present.

I mentioned that whilst the London church had been great, I would be keen to find somewhere that held bake sales and had a cricket team, as well as services. I was looking for a community; somewhere we could stay for several years. Jesus, jam and cricket – a very concise way of putting it.

Alex’s friend Matt recommended St Michael’s in Blackheath, so we had a look two days later. He sent us photos of a  couple of friends of his who worked there so we would have people to talk to. The church was beautiful, the service really interesting and Joe & Lauren – Matt’s friends – were perfectly lovely.

I did a lot of thinking over the next week. Attendance at Carolyn’s wedding had brought with it countless questions of when I would follow suit. Why couldn’t it be next year? I’d found an impressive church, and I was off to Portugal with Alex in four weeks. Could I plan a proposal in that time? What would I be getting myself into? Would she say yes?

I thought I’d give it a shot, and wrote a list of things that would need to happen before we left for Portugal. I’d already found a church, so began crossing the rest of – agreeing with myself that should anything not happen in time, I could still propose later. After all, I had already told Alex I did not want to ask until autumn at the earliest. This would come as a complete surprise.

So what is marriage ? One of the first people I thought I should talk to was Sandy Christie – the vicar of St Michael’s – an ex-lawyer as well as a husband and father. I dropped him an email shortly after attendance at our second service and popped round his house for tea. What I expected to be a short chat ended up taking over 90 minutes as we discussed the practical challenges ahead, the role of marriage in the church and also how amazingly awesome marriage was. He asked a lot about us and was genuinely supportive, which was really nice. I was off to a really good start.

Step 2 – Talk to friends and my family

We first discussed marriage during a day trip to Paris at the end of January that year. It was just three months it, so the conversation was laden with hypotheticals and we tried valiantly to talk of marriage as a concept, not something the two of us might engage in. The conversation served to give me a very clear idea about Alex’s views. The first highlight was how important friends and family were to her.

Thankfully I did not have to wait too long to get a friend of Alex’s onside. The afternoon of our second attendance at St Michael’s, we met Jo Rush for lunch at Le Pain Quotidien in Waterloo and I broached the subject while Alex was in the bathroom. Jo was very excited, and we talked about how exactly I was planning to propose. This conversation was cut short by Alex’s return to the table, whereupon I quickly switched the conversation to the topic of cheese. I can talk for ages about cheese.

Ciaran and Ellie were two of my friends I wanted to sound out near the start of my plans. I have known Ellie ever since uni, and she’s been a really consistent fantastic friend. I met Ciaran at work in 2010 and have had many drunken escapades with him. Both were really happy for me, and both promised they could keep a secret.

The other friend to talk to was Joe Crisp, member of our new church. We went for a beer one weekday evening at the Railway Tavern, and discussed married life, St Michael’s and thoughts about faith. It was good to get the perspective of someone who had strong ties to Blackheath and had not been married too long.

That left my parents, who I got to properly talk to during the weekend of 20th June. I had told them earlier in the month, but stayed a few days in Wycombe and had some great conversations.

Another revelation from the Paris day trip was that Alex would love to the opportunity to shop for her own engagement ring. This took the weight off my shoulders somewhat, as I am the wrong person to talk to for jewellery tips. It also allowed me the freedom to get a truly creative dummy ring, knowing that she would not have to wear it forever should she say yes.

During my Wycombe stay with my parents, I sat in front of the computer with my mum and we searched ‘Disney ring’ online. We settled on the below, which I hope you’ll agree was a decent find.

In spite of not having to pick a ring, I still had to research how much one would cost. As expected it was not a small amount. I would need to get my finances in order to ensure I was able to buy one. Thanks to my iPhone and decent signal on the morning commute, I began to get a feel for the different styles available with the aim to not only get Alex the ring she wanted, but to also give an opinion on it.

Step 4 – Get her father’s approval

Alex’s parents split their time between houses in France and Surrey. I knew they would not be in the country again until the autumn, so asked Alex hypothetical questions about the nature of paternal approval of a wedding. She was keen that her father’s approval be asked, but she agreed that this was fine by letter. She even helped me write the letter. She maintains she still had no clue a proposal was on the way at that point!

While I won’t be sharing his response, I can tell you my favourite line is “Not that you need my blessing or approval to ask Alexandra to be your wife, but I am very happy to give it without reservation”. I didn’t tell Alex I had received anything from him until after the proposal.

Step 5 – Get her sister onside

The weekend I was in Wycombe, Alex’s Durham-based sister Caroline was visiting her Dartmouth Park Avenue flat. I joined them on the Saturday and, whilst Alex was out of the room, showed Caz a photo of the dummy ring. She was very excited and we talked about my plans for the proposal.

I knew that we would be in Portugal on 1 July, so made sure Alex knew we’d be marking our eight months together in style and to pack accordingly. I dropped a line to Sofia, who we were staying with, to ask if we could use the roof terrace of her restaurant that evening. Not only was she happy to let us, she was also keen to decorate. Exactly how I was to propose, and the idea to use a presentation, came only a few days ahead of time. The wheels were however in motion.

Step 7 – Everything comes together

That final week before we flew out to Portugal was one of the longest in my life. I had a big secret which I could not tell my best friend, and to top it off I had pulled my back. Work was also knackering and I was really worried the final pieces of the puzzle would not come together in time.

Thankfully I received Alex’s father’s response two days before we flew out. On the same day, I got my finances in order. The dummy ring, however, did not arrive until the next day. Quite the cliffhanger really.

It was very hard to keep the secret from Alex during those last few days. We decided to try and fix Alex’s phone on the train to the airport, so she used mine to call Orange – her service provider. She took it from me before I could clear a text from my sister from the screen. It said “Good luck Mike – she’d be silly to say no”. Alex didn’t notice.

On our flight out Alex was keen to tell me about “Rude” by the band Magic, about a guy’s frustration with his girlfriend’s father’s disapproval of their marriage. I dismissed it out of hand. She took it as a sign I did not want to talk about new bands. It wasn’t – I didn’t want to talk about weddings!

Early the morning after our arrival I went off to Sof’s restaurant to store the ring and Alex’s father’s letter of approval in a safe place. Alex thought I was abandoning her. Quite the opposite – I was planning to ensure we’d be together for quite a while !

We decided to spend a night in Sagres on 30 June, and booked a cute “appart-hotel” on the coast. The next morning, we wandered down to Sagres Castle – the most westerly point of Europe. We called it ‘the end of the world’ and it surely felt like it that day, as clouds engulfed part of the castle and left us thoroughly drenched. We were however incredibly happy, as the views were beautiful and the castle sold pasteis de nata.

We drove back to Albufeira, stopping of at a pirate shop on the way. Once we were back, I left Alex at the Sofia’s flat, saying I had to set up our anniversary celebrations. I wandered to Sofia’s restaurant, Louisiana, however there was little to do in terms of decorations. They had already cleared the terrace and spread rose petals throughout. The walls were lined with candles and a table was set in the far corner. It really was quite magical.

I met Alex a couple of hours later, at the top of the hill and in front of the future site of Mikey’s Kareoke and Ribs Bar, which I plan to open in 2040 if all goes well. We asked a passing couple to photograph us, and the chap took the below whilst warning us of squirrels.

We then headed to Al Cafe for cocktails – an Arab-themed bar with lounge music. Another place another photo. Not to jump the gun (I mean, you know the outcome of this story, right?) but the below served as our Save the Date picture.

Next was Louisiana, and I followed her nervously up the stairs to the terrace. We were served Prosecco, and toasted while I showed her a Prezi presentation about our time so far –

With the final slide I dropped to one knee and produced a ring. She said yes. Which was awesome.

To be honest, the next few days were a total blur. You could have told me I had won the lottery, or was being investigated for corporate fraud, I would have met the news with the same vacant grin. I had the answer I wanted to the only question that mattered.

To have a look at the photos from the proposal evening please click here. For a look at how my friends reacted on Facebook, click here.

Categories: timeline
← How Mike told his friends on Facebook Our Guard of Honour →